Reproductive toxicity, also known as reprotoxicity, refers to any substance with a potentially toxic effect on the process of reproduction.

There are chemical and biological agents that may be mutagenic, carcinogenic, or reprotoxic. Although all of these hazards may affect male and female fertility, the Globally Harmonized System of Classification and Labelling of Chemicals (GHS) differentiates adverse effects on the reproductive capacity, from those adverse effects on the development of the offspring.

How is reproductive toxicity regulated?

Major worldwide agencies including the Organisation for Economic Co-operation and Development (OECD), the International Conference on Harmonisation (specifically the ICH S5 R3), the United States Environmental Protection Agency (US EPA Health Effects), and the Council Regulation (EC), have in place prenatal developmental toxicity studies that provide general information concerning the effects of prenatal exposure on the pregnant test animal and the developing offspring.

What animal models are available for Reprotoxicity?

Reprotoxicity studies are carried out during preclinical testing before human consumption or before being released to nature. Current standards use animal models to see the potential toxicity produced to the parents and also the teratogenic potential of the compounds on the progeny. Animal testing concerning the above guidelines and regulations are carried out on rats and rabbits, although it is true that all experimentation with animals must be under the frame of the 3 R´s (Replacement, Reduction, and Refinement). In this regard, the Zebrafish animal model has become a great tool for scientists to investigate reproductive toxicity.

Features like external spermatogenesis, the high fertilization rate, and the uncountable number of studies done on embryogenesis, are among the many advantages of using zebrafish during these studies.

What are the main endpoints in reproductive toxicity?

There are also specific substances like flame retardants or pesticides that may act as endocrine-disrupting chemicals. These are exogenous substances that alter the functions of the endocrine system, which indirectly can affect the reproductive system, even generating reprotoxicity or teratogenicity.

Other important endpoints which are more specific for males in the offspring are the anogenital distance (AGD) and the semen quality. AGD is routinely used in animal toxicology studies and appears to be a promising, easily obtainable marker of male reproductive health.

Exposures to environmental chemicals affecting androgen action during pregnancy are suspected to have a negative impact on male reproductive function. Male reproductive health is declining due to the increased incidence of testicular cancer, reduced semen quality, and other adverse syndromes. This is why regulating reproductive toxicity is so important for the new active substances. There are even studies suggesting that semen quality may be a marker for subsequent morbidity and mortality.

Semen quality is an important factor accounting for the ability to conceive in a couple. Aspects that influence the quality of semen include volume, total sperm count, morphology, and motility.

As we have discussed earlier, this time and cost-effective animal model can be very useful in determining not only the teratogenic potential of compounds or any possible disruptions in the endocrine system but also in assessing the level of fertilization and the sperm quality of the male fish to evaluate the reprotoxicity

At Biobide we have developed specific assays that measure the sperm quality after in vivo or in vitro exposure to xenobiotics with potential endocrine-disrupting activity, complementing the zebrafish Tertaogenciity (ZET) assay as well as the endocrine thyroid inhibition assay The analysis is done using a computer-assisted sperm analysis with a negative-phase contrast objective connected to a Computer-Assisted-Sperm-Analysis (CASA) system. Motility parameters analyzed include progressive motility, curvilinear velocity, and linearity.

Reduced sperm motility is associated with compounds having a cytotoxic effect. More importantly, this specific assay can identify compounds that might generate a reduction in fertility after a long exposure by disrupting the overall process of spermatogenesis.

Overall, in this article, we have shown the importance to identify agents that might act as endocrine disruptors and have a major effect on fertility. Zebrafish is a unique model to identify these agents at early stages, therefore contributing to safer health and the sustainability of the planet. 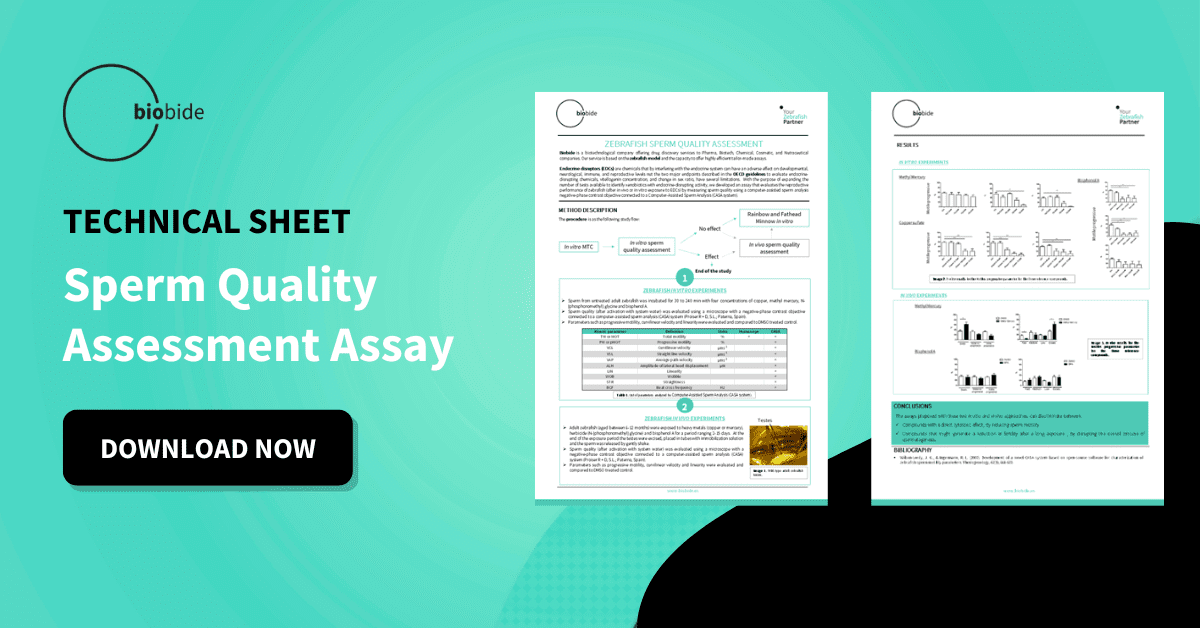