The 3Rs of Animal Research: Ethics and Alternative Models

The 3Rs of Animal Research (Replacement, Reduction and Refinement) were created more than 50 years ago as a framework for performing more humane and ethical animal research. These principles are now standard in many regulatory institutions on both national and international scales. Public polls consistently indicate that animal testing approval is conditional on the application of the 3Rs.

This post will cover what the 3Rs are and how they relate to the current situation on animal testing, as well as alternative technologies and methods, including the Zebrafish. 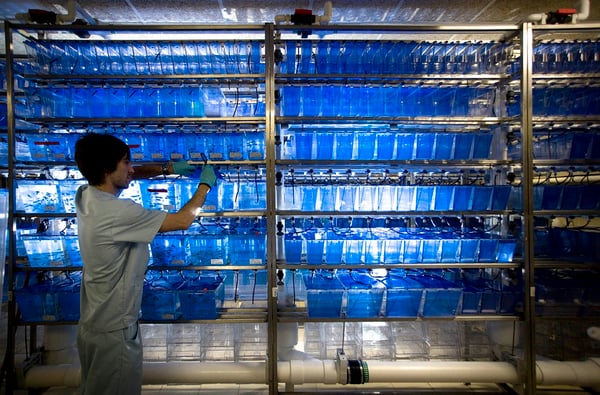 What Exactly are the 3Rs of Animal Research?

The first R refers to replacement of animals in testing by other technologies or approaches. Aside from ethical concerns, animals also often fail to translate as models for humans and are costly to house and maintain. Replacement can be divided into two categories:

Reduction aims to greatly reduce the number of animals used in research and also to maximize efficiency when they are used. Examples include micro blood sampling when repeated taking of blood is necessary (one animal is used instead of multiple) and improved sharing and collaboration of information between research facilities.

The 3rd R encourages the minimization of all types of suffering related to research performed on animal subjects. From suitable housing enabling species specific behavior, to adequate anesthetics or analgesics, refinement aims to minimize all distress.

Suffering can have a significant impact on animal physiology and behavior, reducing their efficacy as models.

With the introduction of Directive 2010/63/EU the European Union has some of the strictest laws concerning animal testing worldwide. The directive was formally applied in 2013 and seeks to protect the welfare of all laboratory animals, specifically:

In 2013 the European Council also created the European Union Network of Laboratories for the Validation of Alternative Methods. The aim of this network is to train and support laboratories in the application of the 3Rs across Europe.

Moreover, testing of cosmetics on animals and the marketing of these cosmetics was made illegal within the EU in 2013. This led many research facilities to seek out alternative methods.

With recent breakthroughs and discoveries, alternative methods are leading the way towards a more humane state of affairs in animal testing. These methods include:

The use of zebrafish less than 5 dpf follows the principle of 3Rs (replacement, reduction, and refinement) as required by national and international regulatory bodies. This is in line with the European Commission Directive of 2010, where experiments with the earliest stages of zebrafish are not regulated as animal studies. Zebrafish models also result in a reduction of time and resources compared to other animal models. They have been especially successful in Drug Discovery Research for human diseases and also in cosmetics such as treatments for hyperpigmentation. Perhaps most importantly, zebrafish larvae as models are more predictable and currently more viable than other alternatives.

While there are many promising advances in alternative research models, zebrafish offer a unique opportunity to make use of a living organism but still follow the principles of the 3Rs, while also reducing the number of animals needed to perform testing.