Muscle Toxicity Studies: How Zebrafish Models Can Be Used

Muscles play an essential function in human physiology. At the same time, muscle damage can lead to a wide variety of diseases, some of them inherited, such as muscular dystrophies, and others acquired, such as cardiomyopathies.

Muscular diseases have been studied for decades using animal models, and extensive knowledge has been accumulated on the mechanisms of these disorders. More recently, Zebrafish have emerged as a novel and robust animal model for the study of human muscle diseases. Zebrafish muscular dystrophy models possess a number of advantages for modeling human muscle disorders, including the availability and ease of generating mutations in homologous disease-causing genes, the ability to view living muscle tissue in an intact animal, and the suitability of Zebrafish larvae for large-scale chemical screens. In addition, skeletal muscle comprises a large proportion of the body. Thus, this model allows a high-throughput screening of muscle toxicity in vivo to determine the potential adverse effects of drugs and chemicals. Let’s review some examples of muscle toxicity studies in Zebrafish.

The causes for muscle disorders are varied and can be inherited or acquired. There are a huge variety of neurological disorders affecting both spines and muscles. Some examples of inherited muscle diseases include muscular dystrophy, congenital myopathy, metabolic myopathy, and myopathies related to channelopathies.

Muscular Dystrophies (MDs) are a severe and heterogeneous set of human muscle diseases that affect different muscle groups, depending on the specific form of dystrophy. They are inherited disorders of the skeletal muscle that are caused mainly by abnormal gene mutations, which prevent the production of native muscle proteins and result in changes to muscle fibers, leading to muscle malfunction. The genetic causes of more than 30 genetically distinct types of MD have been identified thus far. In severe MDs such as Duchenne Muscular Disease (DMD), affected individuals demonstrate muscle weakness from early childhood onwards. DMD is caused by mutations in dystrophin that lead to defects in the dystrophin-associated glycoprotein complex (DGC), generating a link between the cytoskeleton of the muscle fiber and the extracellular matrix (ECM).

Why is Zebrafish suitable to study muscle toxicity?

Zebrafish is an alternative animal model with several advantages compared to other models. These advantages include being an economical option, the ease of maintaining and breeding Zebrafish, and high genetic homology with humans. It has been shown that major Zebrafish tissues and organs share many features with human counterparts at the anatomical, physiological, and molecular levels, including the brain, heart, muscles, kidney, and liver.

In addition to studying the functional aspects of genes and modeling human diseases, Zebrafish embryos are widely used for studying toxicity. Zebrafish is a useful tool in drug toxicity testing based on the evidence for transferrable toxicology to mammals and by the tractable nature of Zebrafish to test toxicities. Although most toxicological tests are performed on embryonic Zebrafish, the adult organism is also a great model for studying toxicant effects on the physiology, longevity, diseases, and behavior of the mature organism.

Several Zebrafish organs are used in toxicology studies, such as the heart, otoliths, thyroid, gut, liver, kidney, gills, and muscles. Zebrafish is an ideal model to study human muscle diseases because their skeletal muscles are very similar in structure, sharing conserved genetic, molecular, and histological features, and they comprise a large proportion of the body, accounting for approximately 60% of the adult body mass.

There are several reports that support applications of Zebrafish as a model to evaluate the effects of toxicants on skeletal muscles to investigate muscular diseases. These studies contribute to the understanding of muscle loss disorders pathogenesis and demonstrate that Zebrafish is a useful in vivo system to model skeletal muscle disorders in humans.

Genetic screens in Zebrafish have identified a large number of mutants that affect muscle formation. Mutations at several independent loci lead to a phenotype of visible lesions in the somitic trunk muscle during the second day of development once movement begins, which gradually accumulates until the animals die before reaching adulthood, a phenotype similar to muscular dystrophy in humans.

In severe MDs such as Duchenne MD (DMD), affected individuals demonstrate muscle weakness from early childhood onwards. DMD is a rare genetic disease with an estimated 300,000 sufferers worldwide, linked to the X chromosome and caused by mutations in the dystrophin gene, which leads to the absence of the dystrophin protein. Genetic models can be developed in Zebrafish for DMD such as Dystrophin deficient Zebrafish mutants. One specific locus, sapje (sap), has been identified as a model of human muscular dystrophy. Sap corresponds to the DMD gene, the Zebrafish orthologue of the human Duchenne muscular dystrophy locus. It has been reported that dystrophin is lost from the end of muscle fibers in sap mutant Zebrafish embryos, confirming that mutants display muscular dystrophy phenotypes. A comparison of the dystrophin-deficient Zebrafish to humans with DMD reveals that it closely resembles the human condition in severity and progression.

Zebrafish embryos are particularly suited to the study of muscle development due to their transparency. In addition, they start to move very soon after gastrulation, allowing examination at the early stages of muscle development, as the specification of slow-twitch muscle fibers. Slow-twitch fibers are somitic muscle cells that start to differentiate 16 h post-fertilization (hpf) and subsequently migrate to the lateral periphery of the somites. The bulk of the somite develops as fast-twitch muscle fibers once this migration has occurred. They have some fiber structures, essentially laminar tendons that transmit force to the notochord, and later to the vertebral column. Their mechanical failure is the pathological mechanism in a Zebrafish mutation that provides the Zebrafish model of an inherited disease of skeletal muscle.

Different muscular end-points can be evaluated to identify muscle toxicity:

In Zebrafish, as in humans, dystrophin is expressed at the peripheral ends of the myofibres and gradually shifts to non-junctional sites. In both species, dystrophin loss progressively leads to abundant necrotic myofibres being replaced by mononucleate infiltrates, extensive fibrosis accompanied by inflammation, and broader variation in the size of muscle fiber cross-sectional areas, compared with healthy muscle.

In addition to toxicity, efficacy screening can also be performed on Zebrafish for muscle disorders. Examples of the tests that can be performed include Testing candidate chemicals using dystrophin mutants and collagen mutants (such as efficacy assay for corrective therapies of DMD or for disease-modifying therapies of DMD.)ç 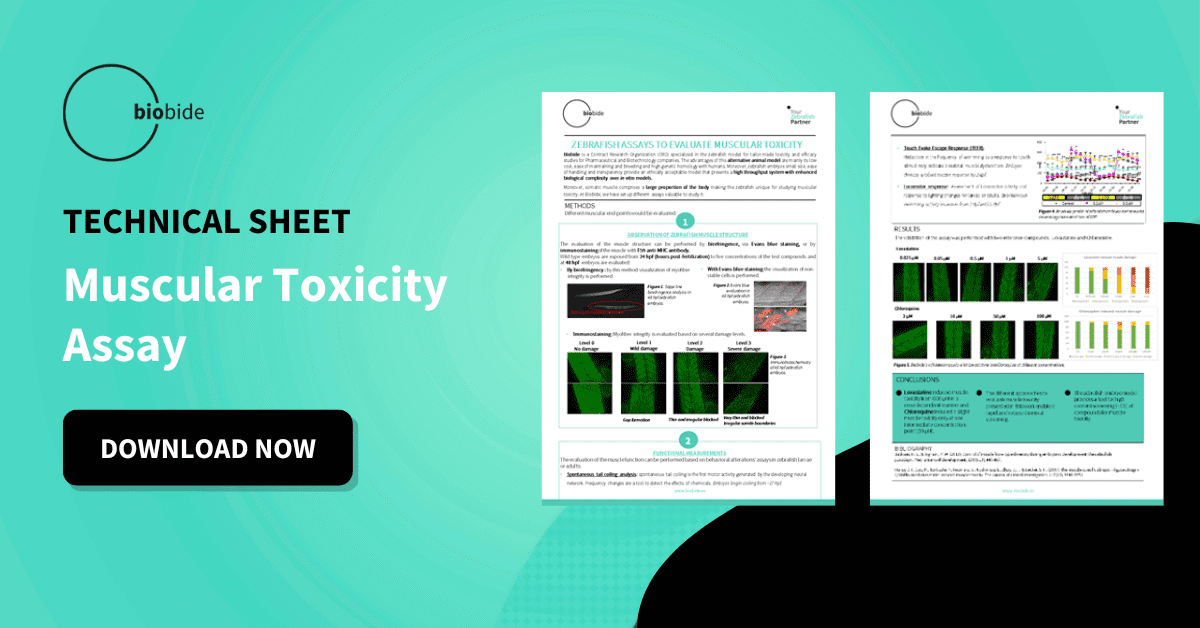