6 Advantages of Using Zebrafish in Research

Zebrafish are an excellent research model and were first used in biological research in the 1960s. Since then, their use for the study of disease and drug development has rapidly increased, with zebrafish becoming a suitable alternative to animal testing. Below are some of the main advantages of using zebrafish in research. 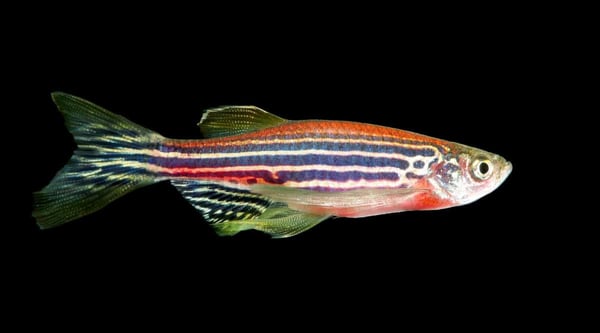 Drug testing can run into billions of dollars, so low-cost maintenance is one of the key advantages of using zebrafish in research.

The zebrafish is an easy-to-care-for species that is less expensive to reproduce. Its small size means many can be housed at the same time, making its husbandry more affordable than that of mammals. The species lays 200-300 eggs every few days which develop rapidly (most of the main organs form in 24 hours), as opposed to rodents which only produce 5-10 offspring in each reproductive cycle and take longer to mature. This reduces the testing time, compared to mammals, giving cost savings.

On the other hand, as the zebrafish is so small it requires less testing material than that of mammals, making the testing process more cost effective. It is also produced outside of the body, making it easier to experiment on than a mammal whose embryos remain inside the body until birth.

This tiny tropical fish contains 70% of the human genome code, meaning its organs and cells are very similar to those of humans. Moreover, zebrafish have orthologs in 82% of human disease-associated genes, making them especially translatable for genetic research. In addition, the zebrafish has two eyes, a heart, a brain, a pancreas, a liver, and kidneys. This makes it appropriate for the study of how disease and substances can affect our organs.

Embryo development is easy to monitor and study due to the transparency of the zebrafish at early stages. Scientists can observe gene function and cell development from the exterior, along with the development of the vital organs and how they react when used for testing. This allows for a degree of non-invasive and easy to monitor testing.

The zebrafish is able to regenerate some of its organs such as the heart, pancreas, liver, kidneys and fins. This is especially useful for the study of cardiac disease, for example how cell tissue is damaged after a heart attack.

Another advantage of using zebrafish in research is that of neural regeneration. The species is able to regenerate neurons in the brain, spinal cord and retina. Damage to these neurons in humans can cause mental, motor or visual impairment. Science is continually searching for a cure for brain diseases such as Alzheimer’s, and the zebrafish is used in research to understand more about this debilitating disorder and how to treat it.

Genetic engineering is essential in pharmaceutical research, to understand how harmful chemicals and substances can affect the human body and how disease develops and spreads. The zebrafish embryo can absorb substances that are added to its water in order to study gene alterations. Zebrafish can support a much higher level of chemical addition than rodents, making it a suitable model for studying the genetic causes of human disease.

Another method is to inject the target gene with processed mRNA (Messenger RNA) molecules. After injection of the mRNA the cells produce a protein that trigger an immune response in the body. This allows the study of how cells react to diseases and viruses.

The zebrafish is particularly suitable for gene knockout and knockdown (when parts of genes are eliminated or replaced) and its similarity to the human genetic structure makes it a popular choice for scientific research on human disease.

An additional advantage of using zebrafish in research is that they are considered to be in-vitro (not live) until 5 days after fertilisation. This research paradigm is therefore a suitable alternative to controversial animal testing, and some evidence shows it can give faster and more accurate results than testing on animals.

Zebrafish have become an efficient and effective model for pharmaceutical research and drug discovery as they have many advantages, from their ability to be easily genetically modified to their cost-effectiveness compared to animal testing. Being suitable for so many forms of assays, including disease, toxicity and efficacy, zebrafish are a common choice for scientific testing.