Developmental toxicity plays an important role in Drug Discovery as it studies the toxic effects a chemical or substance can have on an embryo or fetus. When exposed to a particular substance, the health of the embryo or fetus can be altered dramatically, resulting in cell damage or death.

What Is Developmental Toxicity?

Developmental toxicity is the result of the harmful toxic effects a substance can have on an embryo or fetus that is growing in the womb. This can lead to abnormal organ development and even death.

For example, a mother could be exposed to a chemical prior to being pregnant or while pregnant and the fetus can be severely affected. There is also evidence to suggest that if a father is exposed to a toxic agent this could affect the fetus. This may result in many developmental problems including spontaneous abortion, stillbirth, infant death, malformation, below normal birth weight and congenital defects.

Some of the chemicals that can cause developmental toxicity include mercury, lead, pesticides, alcohol, tobacco smoke, certain infections (e.g. rubella) and radiation.

It is therefore essential to conduct developmental toxicity tests as rapidly as possible to identify hazards for unborn children.

Traditionally, animals have been used to study this form of toxicity, however, there is a rise in the use of alternative models, which can be cheaper, faster, and predict more accurate results.

How Can a Substance Affect an Embryo or Fetal Development?

After fertilization it is possible for toxins to pass through the mother’s placenta to the fetus which can prevent correct organ development.

One of the most well-known examples of developmental toxicity is probably the thalidomide controversy of the 1950s. Thalidomide was a drug that was used to treat morning sickness, colds and flu in pregnant women and was marketed in 46 countries. Tests were not carried out on pregnant women prior to the drug’s launch, and it was believed to be safe until many children were born deformed.

The drug was sold under numerous different brand names and as a result it took over 5 years to identify its adverse impact on the fetus. The result of pregnant women being exposed to a toxic chemical agent were children born with damage to limbs, the brain, hearing and eyesight. Over 10,000 newborns were affected and approximately half died after birth.

As a result, regulations were changed, and it was determined that drugs intended for human use also had to be tested on humans in clinical trials.

The Types Of Developmental Toxicity Tests

As an alternative to animal testing, and in compliance with the 3Rs policy, there are many in vitro tests for developmental toxicity. The 3Rs policy aims to reduce testing on animals and provides a more efficient, cost-effective and less time-consuming method to test for toxicity through:

These models include cell cultures, organs on chips, computer models, and Zebrafish.

Each of these tests has its own advantages and offers an acceptable alternative to in vivo testing.

Zebrafish are a suitable model for developmental toxicity testing as their organs are very similar to those of humans.

The eggs fertilize and develop outside the mother’s body making the embryos easy to study before they are considered in vivo.

A Zebrafish embryo is considered to be in vitro for up to 5 days after fertilization and can therefore be used for developmental toxicity testing. As the organs develop inside the embryo, they can be studied to monitor the effect certain substances have on them. The embryo is transparent, allowing it to be easily studied.

Every adult Zebrafish produces 200-300 embryos per reproduction cycle, which can be weekly, making it a cost-effective and efficient testing method.

This toxicity testing method is important to assess how substances can affect the development of embryos and fetuses and cause adverse effects. Understanding how a chemical can cause toxicity to an unborn life is essential to protect the future of human life. 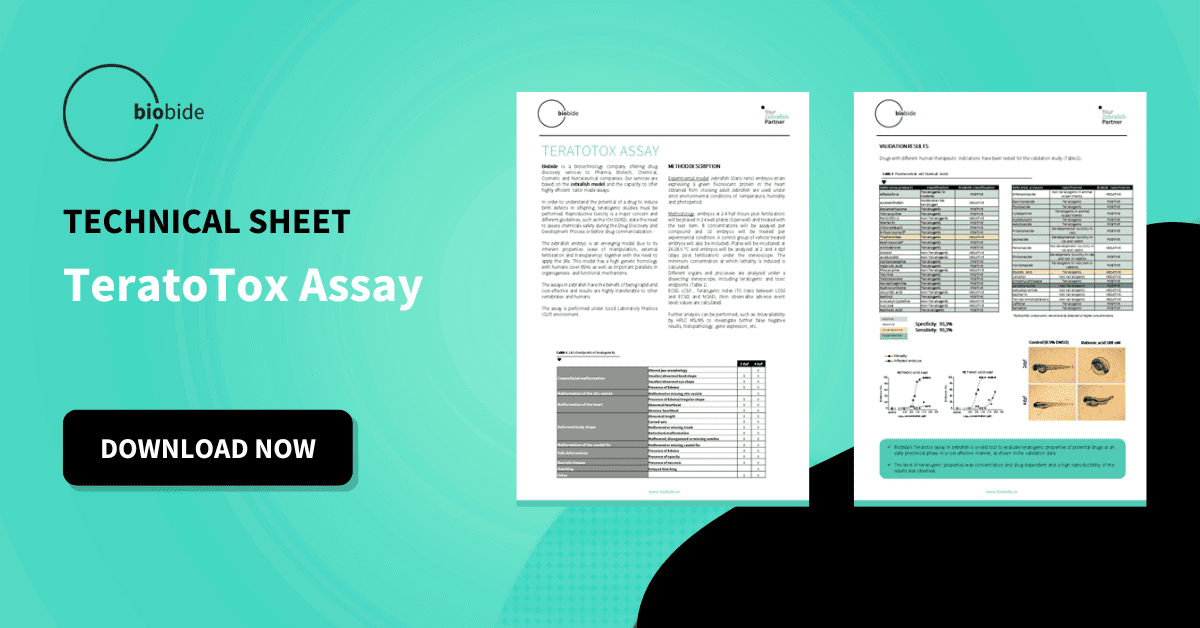