In Silico for Drug Discovery

The in silico method represents an increasing role in drug discovery as technology becomes more sophisticated. It is fast becoming a cost-effective and efficient alternative to animal testing. It can be used in all stages of drug discovery, from screening to pre-clinical trials and greatly reduces drug development time. 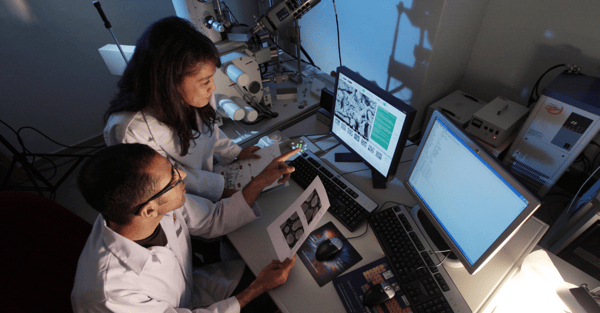 What is the in silico method?

In silico means the use of computer modelling to assist with drug discovery. It is an alternative to in vivo models which rely on animals. Using only animals for drug development is not feasible for several reasons including:

Computers can simulate human cells to examine the effect of particular drugs on them, toxicity levels and safety. In addition to the speed at which this can be carried out, it avoids the unnecessary and what is often considered to be the inhumane treatment of animals, more importantly in mammals. The models that are created exist in virtual reality, where no harm to life can occur.

The in silico method examines the hypothetical results of these computer models to test new and improve existing drugs for the pharmaceutical industry. It also allows for designs that may not otherwise be permitted on an in vivo sample.

In addition to the modelling process, computers can store a vast amount of data on previous drug development, including reasons for success or failure. This can significantly reduce development time for future drugs which in turn saves costs. The stored data can also help predict the effect of a particular drug on the human body for the development of another drug, based on the information stored from previous computer modelling or trials.

How does in silico assist the pharmaceutical industry?

Whilst scientific discovery is important in terms of new drug discovery, diseases are developing rapidly and need faster prevention and cures. It takes around 12 years to develop a new drug from the initial idea to regulatory approval and the average cost is approximately £1.15 billion. This figure only refers to the drugs that make it as far as the approval stage.

Thousands of drugs are developed and tested every year, but only a handful are approved by strict regulations and allowed to be marketed. To illustrate this, in 2021 only 50 new drugs were approved by the FDA (USA Food and Drug Administration) (equivalent in Europe – EMA – European Medicines Agency), and this is the current average, including the COVID-19 vaccine development.

Many drugs get to the final approval stage for a variety of reasons and often fail before they even reach the clinical trial stage due to:

In silico testing can detect these failures much earlier than in vivo testing. It can also detect the positive candidates of new drug development and focus on the tests that are showing encouraging results.

Why is in silico drug development important?

There is a growing need for new drug development as the world attempts to combat existing and new diseases. For example, we have no cure for cancer, yet, according to the World Health Organization an estimated 10 million people die of this disease every year.

In silico is today a vital part of new drug development and success. Computers are able to predict the effect of new drugs with no harm to human or animal life.

The reduction in time and costs means a faster and more efficient drug development process. This also gives the pharmaceutical industry more flexibility to undertake other work and research linked to combatting other rare diseases or trying again with failed clinical development.

There are multiple approaches to choose when building a strategy in drug discovery, starting by in silico platforms and moving towards in vitro and finally in vivo approaches, but even at these late stages, other vertebrate animal models such as zebrafish are a very solid choice in order to minimize the use of mammals.

As with every part of modern life, computers can benefit drug discovery and lead to the design of safer drugs and a reduction in animal testing.