Zebrafish Anatomy: How Does it Compare to Humans?

The Zebrafish (Danio rerio) model is used in human disease research due to its similarity to the human form in terms of organs and tissues. The zebrafish’s anatomy closely resembles the human anatomy in many ways, and therefore allows scientists to investigate why many genetic diseases occur.

Historically rodents and other animal models have been used in pharmaceutical and scientific research. However, the Zebrafish is becoming an increasingly popular alternative vertebrate research model due to its similar anatomical and genomic makeup to that of humans. As genetic modification tools become more advanced, it is also relatively easy for scientists to perform gene modifications to the zebrafish, making it an ideal model to replace testing on other animal models.

The zebrafish has many similar organs that emulate those of a human. It has:

The zebrafish also has blood, cartilage, bones, and teeth making it an ideal research model to replicate human disease. The zebrafish anatomy also mirrors human anatomy in that 70% of zebrafish genes are similar to human genes in terms of sequencing. Therefore, many diseases that occur in the above human organs can be replicated in zebrafish for research purposes. 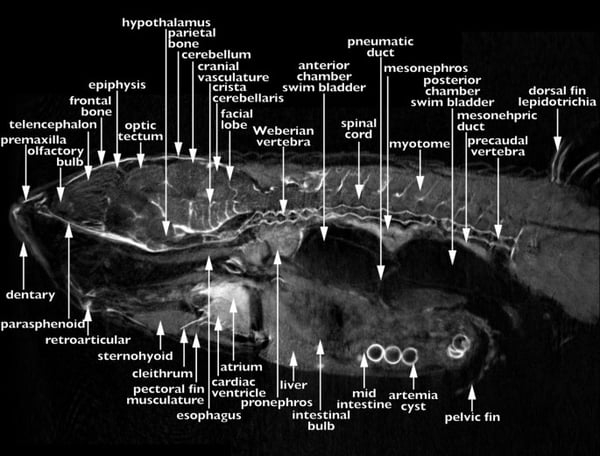 One of the benefits of using Zebrafish for research is their ability to develop into a completely formed organism from 48 hours after fertilization when they then have a fully circulating blood system, a beating heart, and a basic gut. As well as studying the formed organs, scientists can also study the formation process very quickly. Zebrafish produce hundreds of eggs at each fertilization (often weekly), making them a cost-effective choice and giving wider potential for research.

The Study of Human Diseases in Zebrafish

The successful study of a human disease must be able to replicate the human genes linked to the disease in Zebrafish. Zebrafish have approximately 84% of the genes that cause disease in humans. This gives scientists the opportunity to study and research if their molecules are effective for treating a disease.

There are also many diseases in humans which are due to pathogens – an organism that causes disease when it enters the body. Pathogens need a host cell to attach themselves to when they are present in the human body in order to survive. This attachment allows the pathogen to replicate and attach to further hosts cells which causes a disease to develop. Sometimes the human immune system is ineffective against pathogens and cannot fight the diseases they cause, thus permitting disease to spread and grow.

The Zebrafish has a similar immune system to the human immune system, allowing the creation of genetic models to study the behavior of pathogens and how bacterial, viral, and fungal infections invade and affect the human body.

Resistance to antibiotics is a key pharmaceutical research project that benefits from the similarity between the anatomy of zebrafish and humans. Antibiotic resistance means certain diseases, such as pneumonia, tuberculosis, salmonellosis, and gonorrhea are not reacting to antibiotic treatment, making these diseases difficult to treat. According to the WHO (the World Health Organization), this is a major threat to global health and the organization recommends the healthcare industry invests in the research and development of this field.

Other examples of human diseases and ailments that have been studied in Zebrafish due to the likeness between the zebrafish anatomy and human anatomy include:

Research into mental health diseases such as autism spectrum disorder (ASD), schizophrenia, and neuropsychiatric disorders has also been carried out using Zebrafish models to study their causes and developmental processes. This research takes place in vivo (on a live organism), allowing scientists to modulate human neurological genes and study their effect on the functioning brain of the zebrafish.

Zebrafish genetics are also used by scientists for therapeutic drug research and some of the drugs under this umbrella have led to clinical trials.

In summary, the comparable qualities between zebrafish anatomy and human anatomy unlock the opportunity for pharmaceutical research to make a significant contribution to the prevention and control of many human diseases and to save lives.