Zebrafish Genome Compared to Human: How Are They Similar

In recent decades Zebrafish (Danio rerio) have proven to be a valid subject for vertebrate genetic disease studies. Their use is both innovative and logical as these tiny fish possess many advantages over other animal options. Their quick growth, transparent embryos and, most importantly, genetic makeup, combine to make zebrafish an ideal model for research.

In this article we’ll describe how the zebrafish genome compares to humans, and how these similarities benefit disease research. 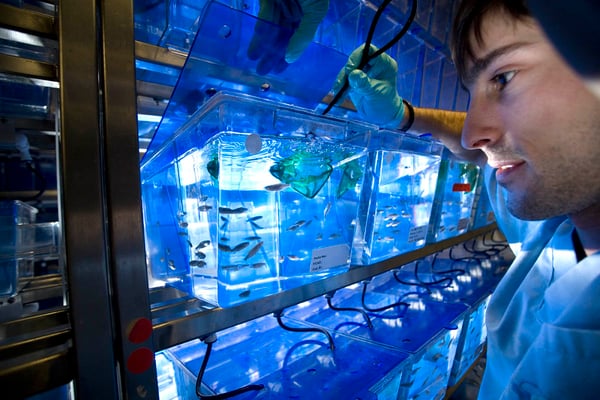 Zebrafish may seem a strange model for research related to humans—they’re not mammals, they have no arms or legs, they have different breathing systems, they live underwater, etc. They are vertebrates, however and as previously mentioned zebrafish and humans share 70% of protein-coding genes. What’s even more impressive is that 84% of human disease genes have zebrafish equivalents, which means the zebrafish genome compared to humans is actually quite similar.

The zebrafish genome has been sequenced to an unusually high standard. Due to the quality of the sequencing, scientists have successfully developed nearly 15,000 mutations in zebrafish models. Only two other genomes have been sequenced to such a high level: the mouse and the human genomes.

Reasons why zebrafish are so special as a research model are complex when it comes to genetic similarities and differences. It is clear however that we have much more in common than you might think. Zebrafish also have chromosomal regions which influence sex determination, another characteristic unique to the species. What’s more is that the zebrafish genome only contains 154 psuedogenes (genes that have lost function by way of evolution). Compare that with around 13,000 psuedogenes in humans.

Zebrafish as Models in Treatment of Human Diseases

Due to the many similarities between zebrafish and human genes, these stripey swimmers have become key in Drug Discovery and translational research. Practically speaking they offer many advantages as research models:

The understanding of several human diseases has already grown leaps and bounds because of zebrafish studies. Biological breakthroughs in cancer and heart disease research have been especially promising. As if zebrafish weren’t already ideal models, these mighty fish can also regenerate damaged heart tissue, meaning scientists can observe stages of growth. This lends itself to advances in understanding tissue and organ development in humans.

Furthermore, zebrafish have been key in verifying the casual gene in human muscular dystrophy and in understanding how skin cancers develop and spread. Significant factors contributing to this success are external fertilization and transparent embryos, which allow scientists to observe growth and possible mutations in developing zebrafish; fluorescent dyes mark transgenic organs/tissues and make them easier to identify.

History of Zebrafish as Research Models

While use of zebrafish as models began in the 1960’s, they swam to prominence in the 1990’s and 2000’s after a discovery related to gene mutation. During screenings for mutations, zebrafish were identified as possible candidates for study as the mutations can create defects in organ systems similar to humans. The project was headed by the Nobel prize winner Christiane Nüsslein-Volhard and Wolfgang Driever, who worked previously on fruit fly research.

This is only one step in a complicated process, however: morphological changes and overexpressed fluorescent proteins in organs could be observed in the transparent embryos, but their effect on genes could not. In February of 2001, researchers at the Wellcome Trust Sanger Institute began sequencing the zebrafish genome.  Completed in 2013 the zebrafish genome project discovered over 26,000 protein-coding genes, the most of any vertebrate sequenced. Incidentally, scientists found zebrafish to share 70% of the genetic makeup of humans.

At first glance it would seem that humans and zebrafish don’t have much in common at all. Yet as we all know, looks can be deceiving. And zebrafish continue to deliver according to Dr Derek Stemple, from the Wellcome Trust Sanger Institute: "This genome will help to uncover the biological processes responsible for common and rare diseases and opens up exciting new avenues for disease screening and drug development."