Target Identification: What is it, Methodologies and Best Practices

Drug Discovery is a multi-staged process designed to ensure everything about a new potential treatment is well understood before it is used by patients. However, even before any testing on humans or live animals can be conducted, a new drug needs to first be found.

That first step is called target identification and it is where early Drug Discovery begins. The initial phases are focused on screening molecules and chemical compounds for anything that might show signs of therapeutic potential.

What is Target Identification?

Target identification aims to increase the odds of finding a new drug. At this stage, scientists can focus on specific genes, a particular site of the DNA, a protein, or another type of molecule that might be involved in the pathogenesis of the disease and then screening as many candidates as possible.

The main method used for target identification is through CRISPR. The discovery of CRISPR has opened up new ways to explore DNA and chemical compounds. The ability to manipulate and edit specific genes allows testing whether a gene is implicated in the development of a specific disease.

No matter the method, the goal is always to move the new drug further down the Drug Discovery road.

The first steps of early Drug Discovery are about catering to a larger scale in order to find as many hits as possible. Once target identification is done and validated, it is used to screen a large amount of potential new drug molecules and chemicals.

Initial screenings open up new medical possibilities in a process that ends with a clear understanding of everything about the molecule and its effects on the human body.

The goal is to minimize the number of dead-end structures while maximizing the understanding of any potential new drugs. However, being the first step in the Drug Discovery process also means it’s the first roadblock that pharmaceutical companies need to overcome.

The process of screening, analyzing, and testing chemical compounds can be further enhanced by using alternative animal models. Observing a more complete picture of how the new drug affects a biological system is valuable information at early  stages of Drug Discovery.

While observing effects in a biological system is always a good idea, there are multiple points to consider when choosing an animal model for early Drug Discovery. Some models like fruit flies are affordable and easy to scale but lack comparable genetics to humans. Mammals closer to humans like mice can provide amazing information, but their longer reproductive cycles and regulations around their treatment can dramatically slow down the entire Drug Discovery process.

Other animals like zebrafish fit a special place between both, being affordable vertebrates that develop externally. That mix of being genetically similar to humans while also being easy to scale makes them an ideal candidate for High Content Screening and early Drug Discovery in general. 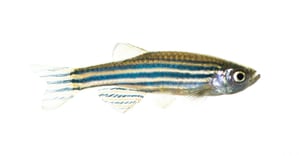 Moving quickly through target identification and into preclinical studies  is easier with an animal model like zebrafish.

After a target has been properly identified, preclinical studies require tests and assays to be repeated many times. The strict laws and regulations around Drug Discovery demand a complete understanding of the toxicity, efficacy, and safety of any new drug.

Zebrafish are an example of an animal model that allows researchers to quickly and efficiently conduct the experiments, tests, and assays needed to gain an understanding of how exactly a new drug could affect the biological system in humans.

To cite a few examples, zebrafish have already played a key role in building a better understanding of cancer, muscular diseases, and cardiovascular issues. How these diseases develop in humans and how drugs could affect patients can be better understood through the use of zebrafish as an animal model.

As the first step in early Drug Discovery, target identification is where the life of a new drug begins. Finding a new treatment that could change or save countless lives all starts with screening molecules and analyzing chemical compounds.

Finding a new drug at the earliest stage of Drug Discovery is all about working with as large a scale as possible while ensuring the results are as viable and promising as possible.

Using an animal model like zebrafish helps build a better understanding of how promising an initial hit really is while also working at the large scale needed for target identification and High Content Screening.

The value of being able to study everything with an animal model that is genetically close to humans and at the same time it is considered an in vitro assay when these fish are under 5 days post-fertilization, is impossible to understate. Observable results that mirror effects in future human patients move Drug Discovery forward while building a better understanding of how the new drug affects the biological system.