Cannabinoids efficacy assays are analyses that allow for determining the safety and efficacy of cannabinoids.

In the last few years, cannabis and its derivatives cannabinoids, have been legalized in several countries. The appearance of legislation has brought the concurrent introduction of product regulations, including safety analysis and efficacy testing, according to the applications and the requirements of each country.

Cannabis has been proposed as a treatment for a wide variety of medical conditions, like the management of amyotrophic lateral sclerosis (ALS), Parkinson's, or Huntington's DiseaseMoreover, the use of cannabis derivatives such as cannabinoids attract the greatest interest. Cannabinoids are cannabis derivatives and some of them, such as cannabidiol (CBD), have shown potential as therapeutic agents. Their medicinal use is being investigated further and product regulation require not only safety analysis but also efficacy assays to demonstrate the activity of the products, even comparing with reference compounds for those therapeutic activities. Cannabinoids´ efficacy assays in alternative animal models such as Zebrafish are being developed to provide time and cost-efficient results. Cannabinoids include psychoactive and non-psychoactive compounds produced by the cannabis plant. Cannabis contains over 100 cannabinoids at varying levels, tetrahydrocannabinol (THC) and cannabidiol (CBD) the most important.

THC is the main psychoactive compound. The psychotropic effects of THC are of concern as it may heighten anxiety and can cause addiction and cravings. On the other hand, CBD is a non-psychoactive component and it was declared free from any potential health risks or abuse potential by the World Health Organisation (WHO) in 2017.

Cannabis contains other cannabinoids, such as cannabinol (CBN), cannabigerol (CBG), cannabichromene (CBC), and cannabidivarin (CBDV). Although these minor cannabinoids are less studied, they are also of great interest.

In recent years, various cannabinoids have shown potential as therapeutic agents and they are gaining traction in the cosmetics industry too. Their use has been regulated by law in several European countries and by Food and Drug Administration (FDA) in the United States.

In addition to its safety profile and the lack of psychoactive effects, CBD shows also a wide range of therapeutic effects, being one of the most studied cannabinoids.

Several experimental in vitro and in vivo studies have shown that CBD has a broad range of therapeutic applications, displaying anti-inflammatory properties, modulation of the immune system, anti-psychotic, antiemetic, analgesic, and anti-epileptic effects, among others. It has been reported that certain cannabinoids such as CBD can reduce inflammatory responses in patients with autoimmune diseases. In addition, the analgesic effects of CBD are also of interest as an alternative to painkillers. The anti-cancer properties of CBD have also been demonstrated by several pre-clinical studies in different types of tumour cells. Other studies find CBD useful for relieving a variety of mental and physical symptoms such as anxiety, insomnia, and pain in patients suffering from a substance use disorder, suggesting that CBD could be an effective treatment for opioid addiction. Recent reports suggest that CBD may also improve the behavioral and psychological symptoms of dementia (BPSD).

Antioxidant and neuroprotective effects of CBD and CBG have also been reported, showing therapeutic potential in diseases such as Parkinson’s disease (PD) and Huntington’s disease (HD). CBG has also been studied due to its anti-inflammatory properties.

Although less studied, CBDV, a structural analogue of CBD, is getting attention in the last few years. CBDV exhibits anticonvulsant properties and, currently, clinical trials are ongoing for the treatment of autism spectrum disorders.

Moreover, there are available some cannabinoid-based drugs already approved in many European countries, such as nabiximols (Sativex), a mixture of THC and CBD to relieve muscle stiffness and neuropathic pain in multiple sclerosis. In addition, FDA recently approved Epidiolex, a CBD oil for the treatment of some paediatric epilepsy conditions.

With the increasing cannabis regulationthe industry has increased the demand for accurate and precise testing methods.

In drug development, safety is important, but so is efficacy. Efficacy assays allow for determining safe and efficient compounds. A popular efficacy testing method is to test compounds using animal models for specific diseases.

In the last years, there has been an increase in the number of studies that have analyzed the pharmacological effects of cannabinoids using zebrafish as model animals. Achenbach et al., 2018, described an example of using stress models of zebrafish for cannabinoids testing. They evaluated the acute effects of both THC and CBD on larval behaviour and the results showed that both CBD and THC had significant effects on behavioral changes, providing validation for the zebrafish model and providing a foundation for future work with cannabinoids in zebrafish.

In addition to testing safety, Biobide can design cannabinoids efficacy assays in Zebrafish, to demonstrate the efficacy of cannabinoids through behaviour analysis. Behaviour alteration assays allows the evaluation of central Nervour System (CNS) function and locomotor analysis, leading to an early selection of candidates in a cost-time efficient way. 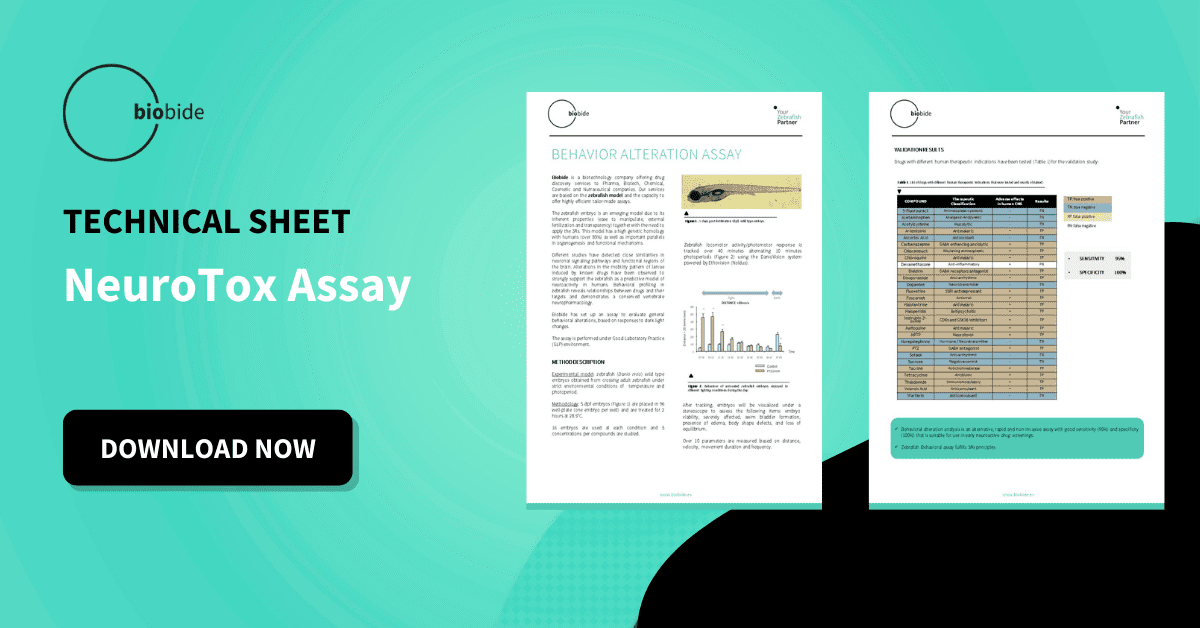