What is mCherry and How is it used?

mCherry is a fluorescent protein that presents a monomeric structure of 236 amino acids and a mass of 26.7 kDa. Fluorescent proteins are members of a structurally homologous class of proteins with fluorescent properties. These proteins have revolutionized cell biology with a variety of applications for monitoring cellular processes in vivo, protein tracking, or gene expression studies.

Fluorescent proteins are especially useful as fluorescent reporters, working as label tags for proteins, by chimeric protein generation with gene cloning techniques, and for reporting cellular status by coupling them to specific gene promoters.

The first fluorescent protein was described as the Green Fluorescent Protein (GFP), which was isolated in 1960 from the jellyfish Aequoria Victoria. However, its application in cell biology started in the late 90s, as was first cloned in 1992 and the broad applications of the protein did not start until several years later with the cloning of its gene sequence for gene expression studies. Since that GFP variants have been engineered with other colors and other florescent proteins from other species have been identified and isolated.

Among color variants generated and discovered, red fluorescent proteins, such as mCherry, are especially useful because they fit perfectly with the microscope filter set. They are better tools for whole organism labeling, as tissues are more transparent to red light. Furthermore, fluorescent proteins with a variety of color spectra are of special interest for multicolor applications, allowing the multi-labeling of samples.

What is mCherry and How it was Discovered?

In 1999, the first known red fluorescent protein was discovered in Discosoma sp. coral, known as DsRed. The mCherry variant has become the most widely used red fluorescent protein because it shows: the best photostability (conferring good qualities for long-term studies), the fastest maturation (assembly) capacity, the higher N‐terminal fusion tolerance, an excellent pH resistance, and presents a low molecular weight that reduces structural interferences when it is fused to other proteins.

In addition, the mFruit set of fluorescent proteins includes mOrange (a very bright orange variant), mStrawberry (red fluorescent variant), and tdTomato (a tandem dimer and one of the brightest red fluorescent tags described up until now).

The emissive and fluorescent properties of mCherry allow its use as an intracellular probe. It is widely used as a fluorescent tracer in transfection and transgenic experiments, being one of the most popular mFruit proteins used for cell biology research.

How is mCherry used?

It is commonly used as a fluorescent reporter, acting as a labeled tag for genes, cells, or organelles of interest, and is usually detected via fluorescence spectroscopy or fluorescence microscopy. mCherry allows different cell components to be viewed in a variety of scenarios, such as analyzing gene expression, genome editing, or identifying species of microorganisms. It is also used for protein study and research because presents precise label capacities for the identification of mobility, localization, and interactions of different proteins in tissues, cells, and organelles. In addition, it matures rapidly, making it possible to see results very soon after transfection or activation of transcription.

Use of mCherry with zebrafish

mCherry is widely used in prokaryotes and eukaryotes systems. It is used for long-term studies, both in vivo and in vitro because is highly photostable and it provides results in a short time during imaging experiments due to the rapid maturation period after transcription.

An example of the use of mCherry in zebrafish at Biobide is the Thyroid Disruption transgenic line or tg:mcherry, a transgenic reporter zebrafish line that expresses red fluorescence in the thyroid gland under the thyroglobulin promoter. The fluorescence signal is assessed by image analysis and compared to the control mean, a concentration-response analysis is performed, and Benchmark Concentration (BMC) and Thyroid Disrupting Index (TDI) is calculated to determine the potency and hazard profile of the test. This allows measuring the fluorescence intensity of the thyroid gland, related to thyroglobulin levels, that can be enriched with gene expression analysis of the induction of thyroid-related genes (tshβ, tg, tpo).

This assay is widely used to screen Thyroid Disrupting Chemicals (TDC) in alternative models (NAMs), to complement other environmental ecotoxicity assays described in the OECD guidelines in fish, algae, or daphnia, or even the teratogenicity assay in zebrafish. 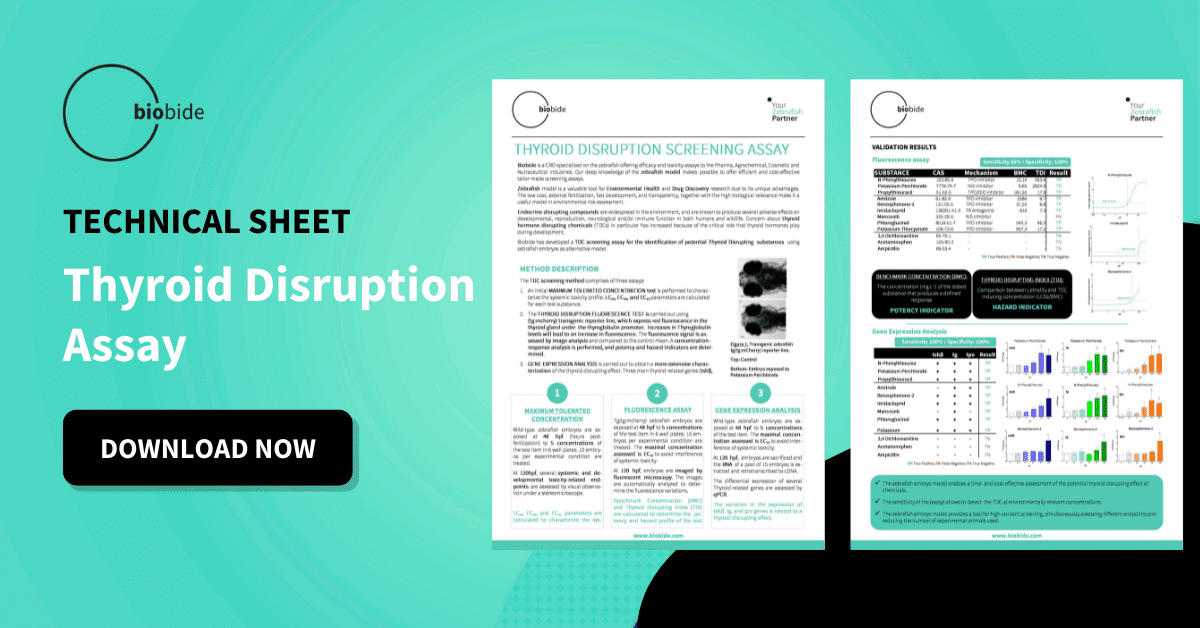