Zebrafish Development Stages: How They Are Used for Research

There are different relevant animal models which are used in research, being rodents the most common model in use. However, zebrafish has traditionally been the one of choice when it comes to studying the developmental stages of vertebrates. There are key features supporting the use of zebrafish research for these studies, including the external development of the embryos, their transparency, their throughput, and the similarity of their organs to mammals. But the short time involved in the formation of these organs is the most attractive added value for using this model. The Zebrafish development stages progress quite quickly, with most organs developed within hours post-fertilization (hpf) as opposed to days, which it would take for organ formation in any mammalian model.

In this article, we will review the Zebrafish development stages with a particular emphasis on the time at which they take place and their relevance for research studies. 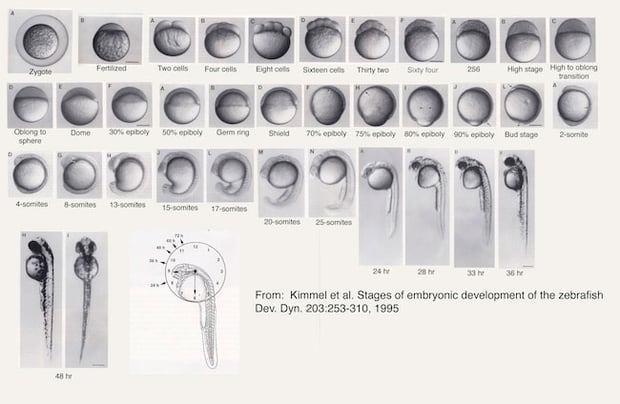 It all starts with one single cell called Zygote which happens at time zero of fertilization. At this initial step, an animal pole is created within the egg. In just 45 minutes, this cell has duplicated forming a partial cleavage. From now on, these two cells will duplicate in successive rounds forming the blastomeres.

The Blastula period starts with 128 cells and these cells duplicate every 15 minutes reaching about 1000 cells in just 3 hours post fertilization. Two areas are here markedly differentiated, the animal-vegetal axis. At 4 hours the egg is spheric and then a dome shape formation can be seen inside. This clear and rapid change marks the interface between the yolk cell and the blastodisc and represents the first sign of the epiboly formation around the egg. Acute toxicity studies can be started as early as 2 hours post fertilization.

Epiboly describes the cell movements that occur during the Gastrulation period of embryonic development and during the epiboly, the shape of the Zebrafish embryo stretches along the animal-vegetal axis. During this stage the neural plate representing a primordial brain is formed and cells that will form the notochord, axial somite-derived muscles, and specific neurons in the hindbrain are also present. At the end of the epiboly, the yolk plug is closed and that gives rise to the bud formation including the tail bud which will also contribute to posterior trunk.

Between 10 and 24 hpf, the somites develop during a period called Segmentation. The rudimentary primary organs of the fish become visible. Body movement starts at this time while the cells differentiate morphologically. The body length of the embryo increases quickly and after 15 hours this length and the somites can be used as a development index. Up to 18 somites are present at 18 hpf and from there two somites are formed every hour. Somites alteration is one of the most representative morphological alterations related to chemicals developmental toxicity. The muscle segments and the vertebral cartilage are arranged along the somites. Pronephric kidneys and ducts develop below the third somite pair. All the sensory tissues such as optic, olfactory and ear tissues start to form at this stage. The sensory neurons and the motoneurons also play an important role in the behavioral reflex and motor response to light in the zebrafish and they become apparent here. This response to light and dark stimuli will be key for behavior studies at larvae phases, done usually after 5 dpf, once most of the neurons are present in the zebrafish.

The Pharyngula period occurs during the second day of the zebrafish development and this name comes from the formation of the pharyngeal arches that will give rise to the mandibula and gills. During this stage the lengthening of the embryo slows down and the head is compacted, the fins form, cells start pigmentation and last but not least, the circulatory system is formed and the heart begins to beat. Heart function will be one important characteristic of this animal to be exploited to evidence the cardiotoxicity of novel chemical compounds.

The last stage of the embryo is Hatching and this can occur between 48 and 72 hours from fertilization. The hatching time might vary from fish to fish but the developmental stages follow the same timing whether they are inside the chorion or not. The fish starts this period with an approximate length of 3 mm and by the third day it is already 3.5 mm long. The morphogenesis of most organs is quite completed by now and the fins, jaws and gills develop quickly. Early hatching of embryos before this stage can be related to acute toxicity of chemicals.

After 5 days post fertilization and once out of the chorion, they start feeding themselves independently, and they will start been considered experimental animals under the Animal Welfare Legislation (EU Directive 2010/63/EU).

As we have seen in this article, many studies with human developmental toxicity relevance can be performed during the different stages of the embryonic Zebrafish development stages. After 72 hpf these little creatures are no longer denominated embryos and they keep developing as larvae. They also start developing pigmentation and they won’t be transparent for direct visualization of the effects during screening anymore.

Developmental toxicity studies in zebrafish are usually performed during the whole Zebrafish development process from 2-4 hpf until 96 hpf. These studies look at morphological alterations as end points throughout the entire development process.